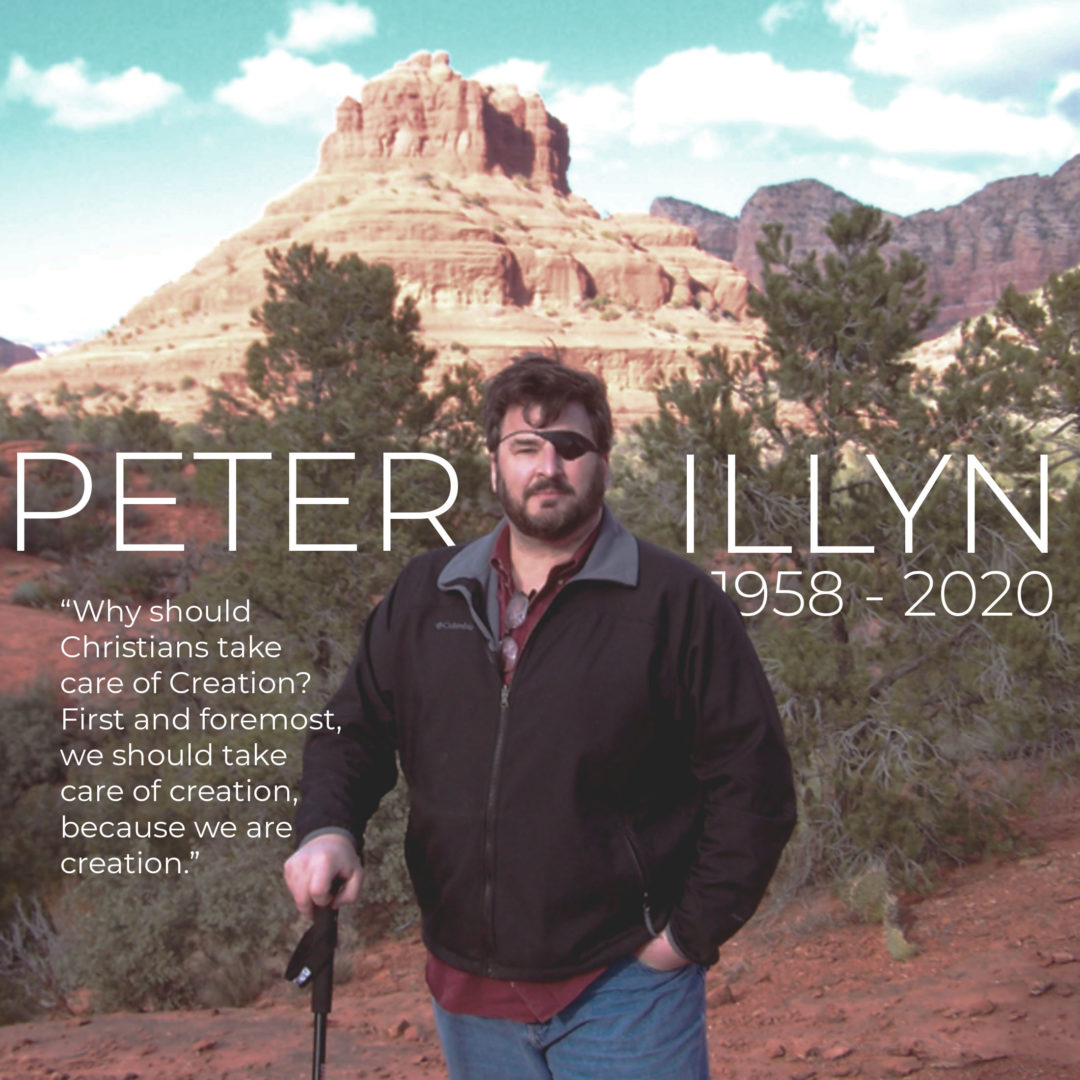 A reflection from our CEO Scott Sabin

On December 11th , the Church lost a pioneer, a prophet and someone whose voice should have been much more widely heard.

I first met Peter Illyn in 1996, at a conference convened by the Christian Environmental Council in Chattanooga. Of all the people I met that week, he was by far the standout. We gravitated towards each other almost immediately, as two of the younger attendees (imagine!) and we found we shared an irreverent sense of humor and slightly jaded perspectives. As a recent Navy veteran, new to ministry and to environmental issues, I was a bit of a misfit in Chattanooga, and found common ground with this rough-around-the-edges former pastor who was able to laugh at himself. Somehow, we ended up skipping one of the sessions, and took off in his rental car to search for a burger from some local fast-food chain he loved. It wouldn’t be the last time I followed him on a side-quest.

During the outing, I first heard his story, much of it publicly recorded later in an Outside magazine article. He told me about his background as a Foursquare pastor, before having an epiphany in the midst of a four-month llama packing trip on the Pacific Crest Trail. I have heard those stories many times since, always accompanied by Peter’s dubious claim of holding the long-distance llama packing record. (Is there such a thing?)

Peter had a larger-than-life personality with a provocative speaking style that both entertained and challenged, although his edginess could sometimes be overwhelming. I remember standing at the back of a church sanctuary with a mutual friend, and both of us breathing a sigh of relief as Peter finished a marvelous address, while somehow resisting the off-color joke that had been on his mind all morning. I always hated following him as a speaker – there was never any doubt in my mind who would be remembered.

For all of his edginess, at his heart, Peter was incredibly passionate about God and God’s creation, and helped me to begin to see the natural world with a lens that was more than simply utilitarian. I owe so much of my current appreciation for the intricacy of nature to Peter. Although I heard his story of encountering a herd of elk in the moonlight a dozen times, I vicariously felt his sense of wonder with every telling, and was reminded that God has a loving relationship with creation, for its own sake.

Peter was a master of catchy campaign ideas. I remember when he went on a speaking tour with a friend from Papua New Guinea, and they dubbed themselves the Cossack and the Cannibal. His involvement in Papua New Guinea and the Solomon Islands was another point of connection for us. Melanesia is very close to my heart – it has always been a dream to work there – and we often talked about whether Plant With Purpose might connect with some of his local church contacts and begin an island project. It always seemed incredibly unjust that his selfless outlook and the real challenges of creating a sustainable organization meant that he frequently struggled to support his calling and his family. I often wondered how those of us with complementary talents could collaborate more effectively and help to amplify those like Peter who were better at catalyzing others rather than institution building.

In fact, I believe this has been one of the tragedies of the so-called Creation Care movement. Plant With Purpose does most of its work overseas through direct implementation, and has a significant poverty alleviation component. As a result, we have been a part of both the creation care and Christian relief and development worlds. The contrast between the two could not be more striking. We have grown into the organization we are today because of the prayers, advice, nurturing, and often the funding assistance of other Christian relief and development organizations.

On the other hand, there has always been a degree of underlying competitiveness among those working on behalf of the environment. As a community, we seem to have operated with a scarcity mindset. Not that we haven’t tried to work together from time to time. Perhaps we have failed because the tenuous survival of our own organizations demanded all of our attention. It can be hard to think deeply about a collective project a year down the road when you can’t cover payroll this week. However, I believe that the inability to support one another and truly collaborate has dramatically reduced our ability to impact the attitudes of the American church regarding God’s creation.

Peter’s death causes me to reflect on whether we can do better going forward. How can we give to each other? How are our talents complementary? Who are those within a new generation whose voices and talents we can support and elevate?

In an attempt to work towards collaboration, we contemplated merging with his organization, Restoring Eden, going so far as to have a joint retreat with our board of directors. It was during that time I learned just how much he was financially sacrificing to be doing what he was doing. I also learned how difficult nonprofit mergers are, when mission statements and organizational cultures are involved. In the end, Plant With Purpose wanted to stay focused on direct implementation and was not ready to take on a greater advocacy role within the United States. However, for a number of years Plant With Purpose directly sponsored Peter’s work, with an annual grant. Unfortunately, when our own funding got tight during one of the economic downturns, I had trouble justifying it to the board, and sadly that support was one of the first things to be cut.

I still dreamed of working together, and as recently as 2015 we were discussing how Plant With Purpose might support a plan to work with farmers in Belize and Guatemala, while protecting endangered fishtail palms and connecting the marketing of the project to American churches preparing for Palm Sunday. Peter’s energy, accomplishments and unique sense of humor were even more remarkable considering that for most of the time I have known him, he has also been fighting aggressive cancer. From the outside, it didn’t seem to slow him down much although looks can be deceiving. After he lost his eye, pirate jokes became a staple, and more than once, while riding with him in his car, he would casually remind me he had no depth perception.

Many times he was told he had only months to live, and he was continually forced to confront the immediacy of his own death. I can only imagine how difficult that was for him and his family, yet he always seemed to defy those prognoses and bounce back. I had begun to think it would always be that way. Sadly, it was not. Peter passed away late last week.

When the pandemic began, I thought I would have all sorts of time, and wanted to be more intentional about reaching out to those I hadn’t seen recently. Peter was near the top of the list, but when I got word of Peter’s death, I still had not made that call. The last time we were together in the spring of 2018, I recorded this brief interview with him: